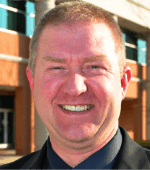 After 20 years in uniformed law enforcement, Dave now owns his own consulting company. He has worked with more than 350 agencies around the world as an executive coach, leadership instructor, keynote speaker, and international consultant supporting the law enforcement profession and the communities they serve. He has instructed leadership, law enforcement, and criminology courses in several universities. He has his Masters in Organizational Leadership and a Doctorate in Educational Leadership with a focus on adult learning methodologies.

Dave first became familiar with Thera Rising’s course on Conflict Savvy! while working on resolving conflict in a law enforcement agency in Oklahoma. Dave gave his copy of Anna’s book to the Chief, who liked it so much he never gave it back. Since then, Dave has purchased several other copies and given them away, never to be returned. He became a certified facilitator of Thera Rising’s Conflict Savvy!, Code of Conduct, and conflict resolution programs in 2016, where Anna gave Dave a signed copy of her book so that maybe he would hold on to this one.